English euphemisms: what are the most common euphemisms?

Common euphemisms in English normally concern religion, death or sex. Examples of these euphemisms are to sleep with instead of to have sexual intercourse with; departed for dead; and to relieve oneself for to urinate.

We can see from these examples that euphemisms bear the same meaning as their taboo equivalent without seeming crude or indecent. 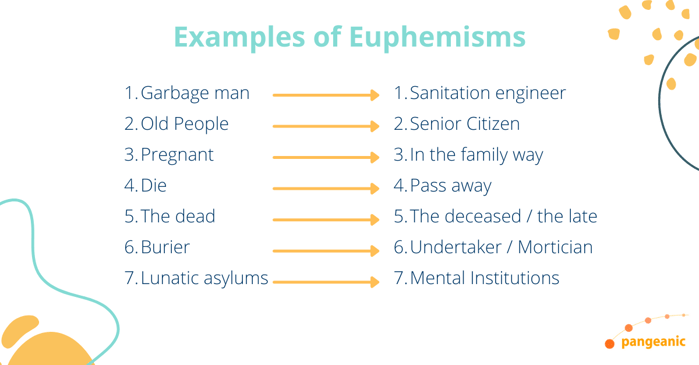 Examples of euphemisms in English

What is a euphemism?

A euphemism is a polite word or expression used to substitute a more expressive or direct one to avoid being distasteful or offensive.

The importance of using common euphemisms in English

Euphemisms can be particularly useful when we are speaking about a subject that can create awkward moments with others and when dealing with children. They can be used to shelter children from adult subjects, to avoid hurting loved ones by being harsh, and to avoid politically incorrect wording in public. Polite sentences and political correctness are therefore both filled with euphemistic phrasings.

Techniques for creating euphemisms in English

Not all euphemisms are created the same way. There are many different methods used in everyday life as well as other areas of life to soften a rude statement.

Keep Reading: When to review a translation? The importance of human translation.

Below, we will analyze different examples of English euphemisms in the work of prominent writers that will help us understand their complexity and applications.

“I am one, sir, that comes to tell you your daughter and the Moor are now making the beast with two backs.”

Here, the expression making the beast with two backs refers to the act of having sex.

Similarly, we notice Shakespeare using euphemism for sexual intercourse in his play Antony and Cleopatra.” In Act 2, Scene 2, Agrippa says about Cleopatra:

“Royal wench! She made great Caesar lay his sword to bed. He plowed her, and she cropped.”

The word plowed refers to the act of sexual intercourse, and the word cropped is a euphemism for becoming pregnant.

"You are a manipulator." "I like to think of myself more as an outcome engineer."

In this excerpt, one of the brothers accuses the other of being manipulative, a word that surely has a negative connotation. Instead of taking offense, the other vampire laughs it off and says he's merely an outcome engineer. Very clever.

By using euphemisms in English, liars can be creative with the truth, women have buns in the oven and employees can be let go instead of fired.

English euphemisms are the ultimate gateway to political correctness.