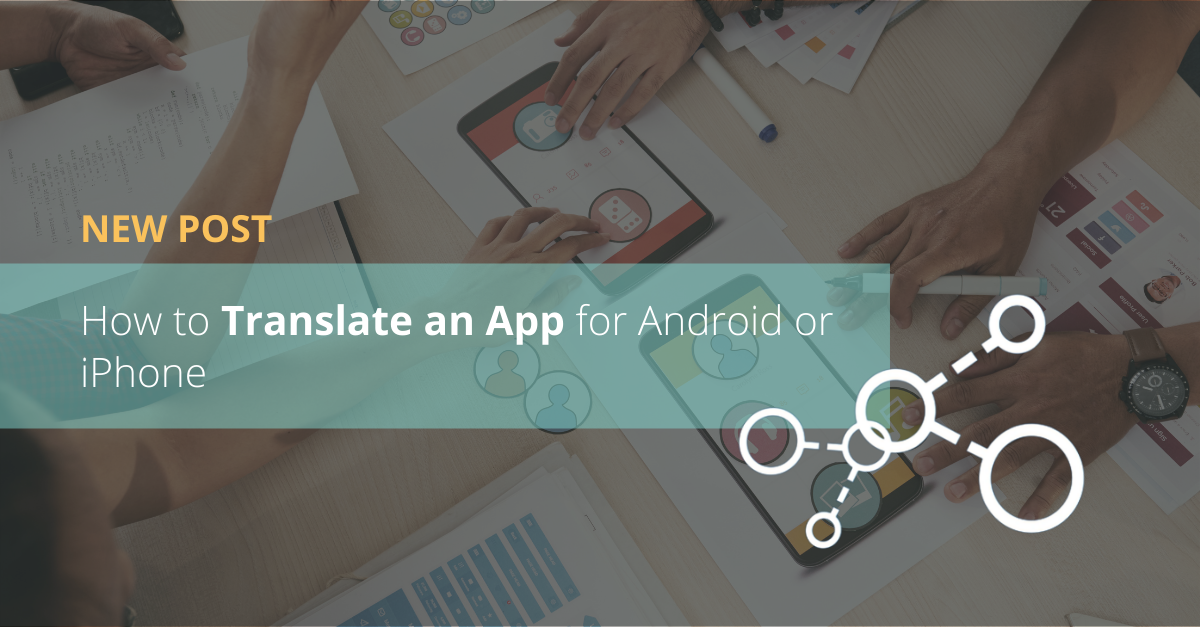 How to Translate an App for Android or iPhone

Finding somebody who has never been on an app is as difficult as finding somebody without a cell phone. The FIFA World Cup app offering live results became the most popular sports app ever by number of downloads in 2014: 18 million and counting. It took the development team at Rovio several failures to develop a game which really didn't seem like a hit (birds fighting and misbehaving)… but “Angry Birds” was enough to make the Finnish game developers rich.

The fairly small investment and the potential for immediate global reach is one of the most appealing factors for app development. One of the great things about the international app market is that through platforms like Apple’s App Store and Google Play, app developers and mobile entrepreneurs can target huge numbers of users all over the world. The barrier is, of course, language.

However, as happens with software, all apps are not created equal and just creating an app and uploading it to a store does not guarantee its success on the global market.

App developers need to consider a few key aspects when wanting to translate an app for Android or iPhone with an international audience in mind.

Last year, Gartner estimated that there were 102 billion app downloads around the world. Gartner presented key trends for the mobile industry at the Gartner Symposium/ITxpo 2013.

If you’re looking to develop a mobile application for tablets and phones, and your intention is to go beyond your home market, you need to have a translation strategy in place very early on. Remember that 72% of potential users will not be native English speakers.

Most software users and mobile gamers want to use apps in their own language. This is natural. But it means developers need to prepare to translate an app for Android or iPhone at development stage, before they actually start marketing it. So, the question is what languages should I target to maximize revenue when I translate an app for Android or iPhone? How can I balance my code with a multilingual interface?

According to research, the top 5 languages for app translation are:

And really you should concentrate on Spanish, French, German, Italian, Japanese, Korean and Dutch if your goal is to monetize. Research shows that people from countries that speak those languages are open to paying for apps.

However, according to Forbes, if your goal is to boast large download numbers, you should translate into Chinese. The Chinese market share alone comprised 12% of global mobile games revenue in 2013. That brings any developer to the most important question: when do you translate the app? Do you wait until afterwards to change the copy?

If you’re marketing a website for the apps, do you translate the website, but keep the icons the same?

Pangeanic has extensive experience when it comes to specialist translation and user interfaces. Thanks to our collaboration within the Japanese industry, we began translating messages for interfaces in the 1990s (remember CD players, DVD players and MiniDiscs?).

We were responsible for many of the messages on the displays in a variety of European languages. So, before apps and even cell phones existed, we learned that the best way to translate a user interface is to have a multilingual approach from very the beginning. If you develop the interface planning for short English words only, you are sure to run into problems. Almost every language is longer than English, with the exception of Czech. You may find that abbreviating months and days of the week, logging in and logging out and app-specific words and actions constrains the language so much that users cannot understand the message. And that is the last thing that you want with your app.

The market is becoming crowded with competition. Therefore, developers have to remember that to translate an app for Android or iPhone is not technically difficult, nor even expensive.

Contact us to find out how a pool of trained and experienced translators can make your app available to the international market. Pangeanic can create machine translation engines and open its powerful API so that selected content and feedback is translated automatically.

However, our recommendation is that programmers should always have translation and localization in mind while they design the app. This means you should:

Follow the above steps and translators will be able to translate an app for Android or iPhone quickly and efficiently for your new markets.

Remember: practically 3 out of 10 users do not speak English or are not native English speakers. It’s essential for your own success to think globally approach when creating apps. Planning translation strategies from the beginning can help guarantee that your app will become truly global and monetizes well.

Pangeanic is one of the best translation companies in the world offering professional translation services to businesses and firms with publishing needs. We specialize in the translation of websites, technical documents, and multilingual publishing processes for companies, the general public and larger, specialist LSPs.

Pangeanic’s mission is “to offer specialist translation, content and language solutions to document producers for global use.” The mission of PangeaMT, our customized, domain-specific MT technology division, complements the company vision: “Bring democracy and affordability to machine translation.”

We envision translation as a standard feature, a utility, which will be incorporated in products and services. Language accessibility will change and push the evolution of human civilization to a much higher level of understanding, education, and discovery.